FAQ created for the following versions

Loxone config tool is divided into a few sections: 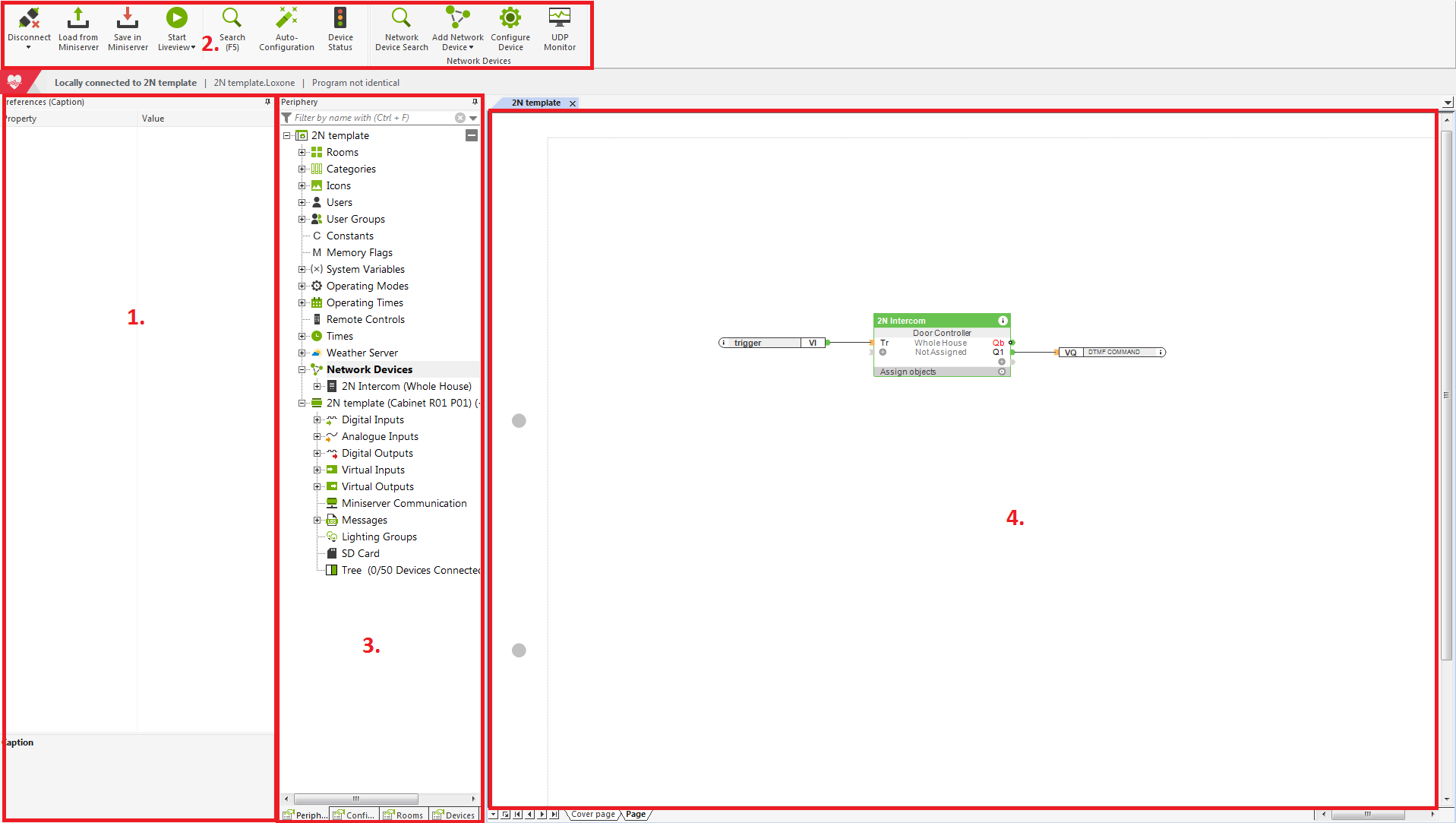 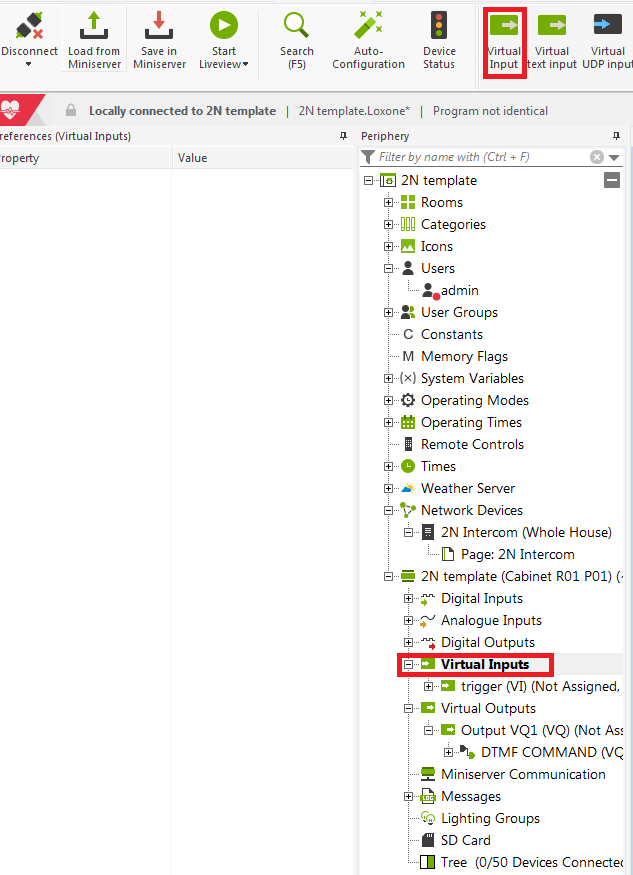 In this example the virtual input is called „trigger“. The name can be assigned to the input in the left property menu by changing the parameter called name (UUID). 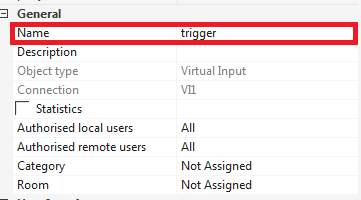 The name of the input is the key parameter here, because it is used in the http command sent from the intercom. Another object which will be use is called „User defined intercom (Door Controller)“. This object can be added to the project by selecting network devices in the Periphery menu and selecting Add Network Device - User defined intercom in the upper general menu. 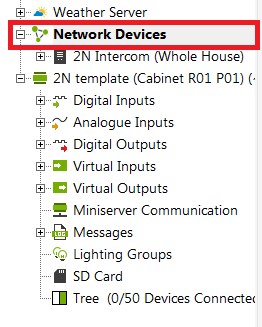 For more info regarding to the HTTP API commands of the intercom click here.

Example of the configuration:

Another parameter that can be configured is called Name for the function 1,2 and 3. This parameter allows you to create a button in the Loxone app which can be used to open the door on the intercom. You can assign the name for the button. In this example the button is called Lock. If the button will be pressed in the app, the specific output on the Door controller object is triggered. These outputs are called Q1, Q2 and Q3 and need to be added to the object. 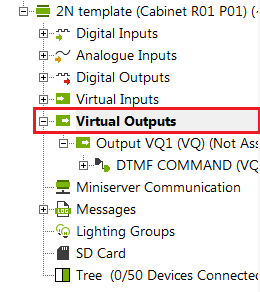 Once the new output is created (in this example VQ1), the virtual output command needs to be assigned from the upper menu and needs to be connected to Q1 output of the Door controller object. 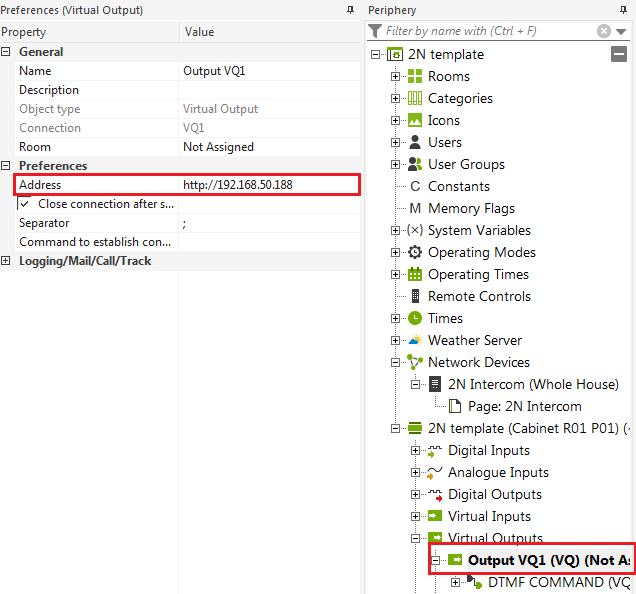 Select the Virtual output command object from the periphery menu (it is called DTMF COMMAND in this example) and define the http command. 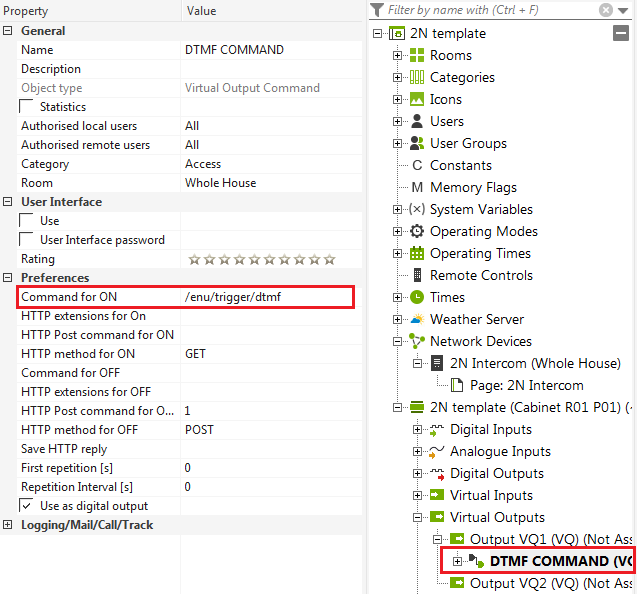 The Http command can control the HTTP API or automation in the intercom. In the example the automation function is used however HTTP API works exactly in the same way just the HTTP command is in a different format. You can check HTTP API manual for more info.

The following command has been used in this example:

key name – is used in the automation on the intercom side as a trigger for some set of actions. In this example the key name is dtmf.

On the intercom side, the automation needs to be configured (the enhanced integration license is required). 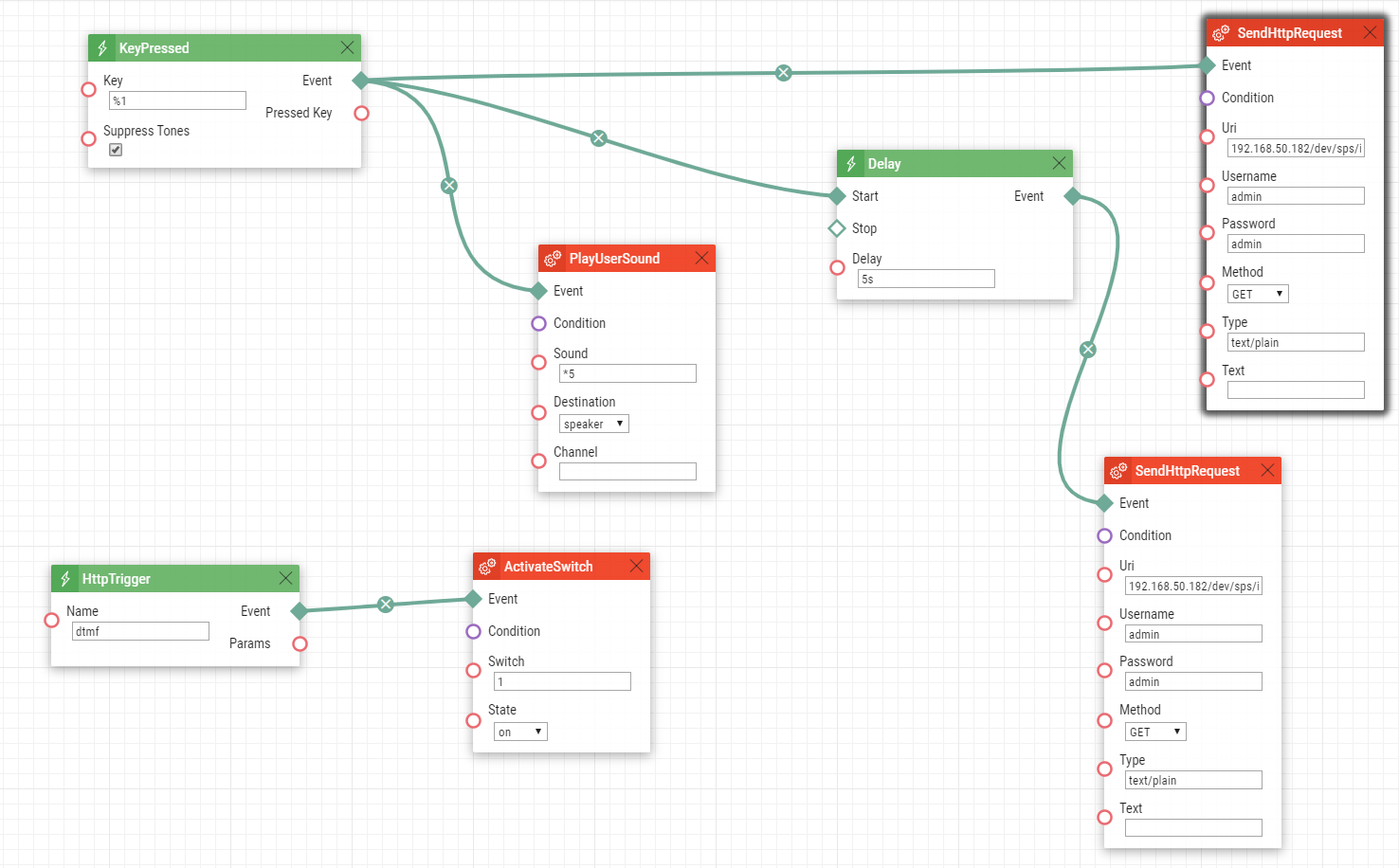 Once the main quick dial button is pressed, the intercom sends the http command towards the Loxone mini server. The command which controls virtual input has the following format :

Login credentials can be changed in the periphery menu, in the section users. You can also create new users and use them instead of the admin access in the HTTP command.

Object SendHttpRequest is sending an HTTP command to the Loxone mini server. Because this object has its own fields for username and password, the URL format is only 192.168.50.182 /dev/sps/io/trigger/on.

The delay object is also triggered during the button press with a 5 second delay and then the intercom sends the http command for the deactivation.

Optionally you can also add a PlayUserSound object so once the button will be pressed, the intercom can play some user sound to notify the user in front of the intercom that the intercom is trying to establish the call.

Another object is HttpTrigger where the key for dtmf is used. So once the intercom receives the http command in the format http://192.168.50.188/enu/trigger/dtmf, the intercom activates switch 1.

Last step is to set incoming call in the intercom to automatic answering mode in the section Services – Phone - calls and HTTP API access for the video stream. 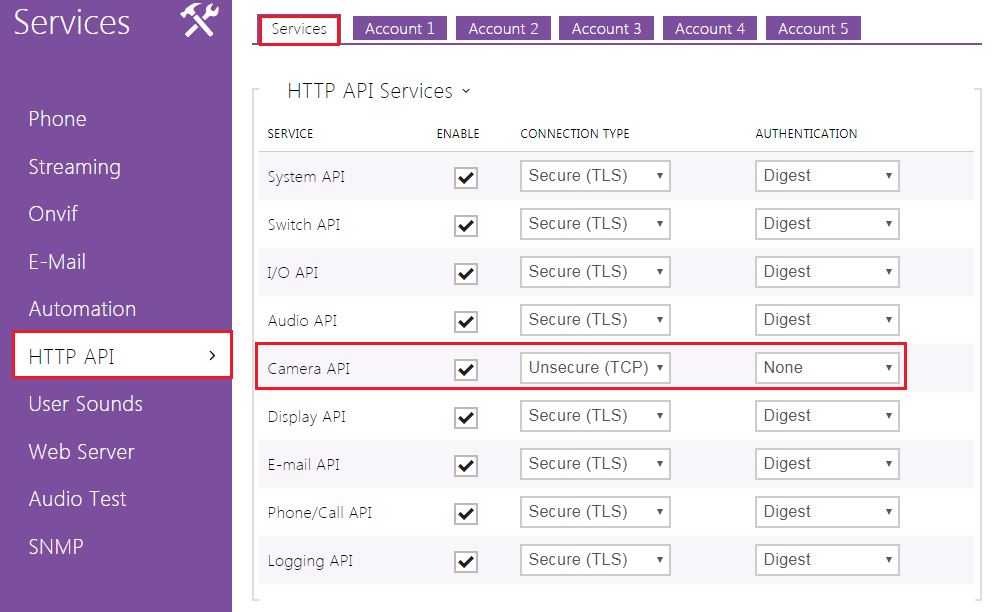 To be able to make an external call to the intercom from the Loxone app which is out of your LAN, several configuration adjustments needs to be done:

The Loxone app / Mini server is always the one who is initializing the SIP call and the calls are anonymous which means that the Loxone mini server is not registered anywhere and trying to establish the peer to peer call.

In case of external calls – only the intercom needs to be registered to the SIP Proxy. Configuration of the door controller is used by the Loxone app on the smartphone and here you only have the options for a SIP host and a user-id. This ID is NOT for the app itself but used to make an anonymous call to the intercom that has been registered as a SIP client with specific credentials. The app is NOT a full SIP client, so it does not register with a SIP provider. The Loxone app can make outgoing calls as an anonymous SIP user to the intercom by using the user-ID as a "phone number" for the destination (the intercom).

To be able to make an external call, the call needs to be sent to some proxy server which is able to receive calls from unknown sources. In this example server called antisip.com is used. Once the account is created, the intercom needs to be connected to the server. This can be done in section Services – Phone - SIP 1 or SIP 2.

In this example the details obtained from anitsip.com are: 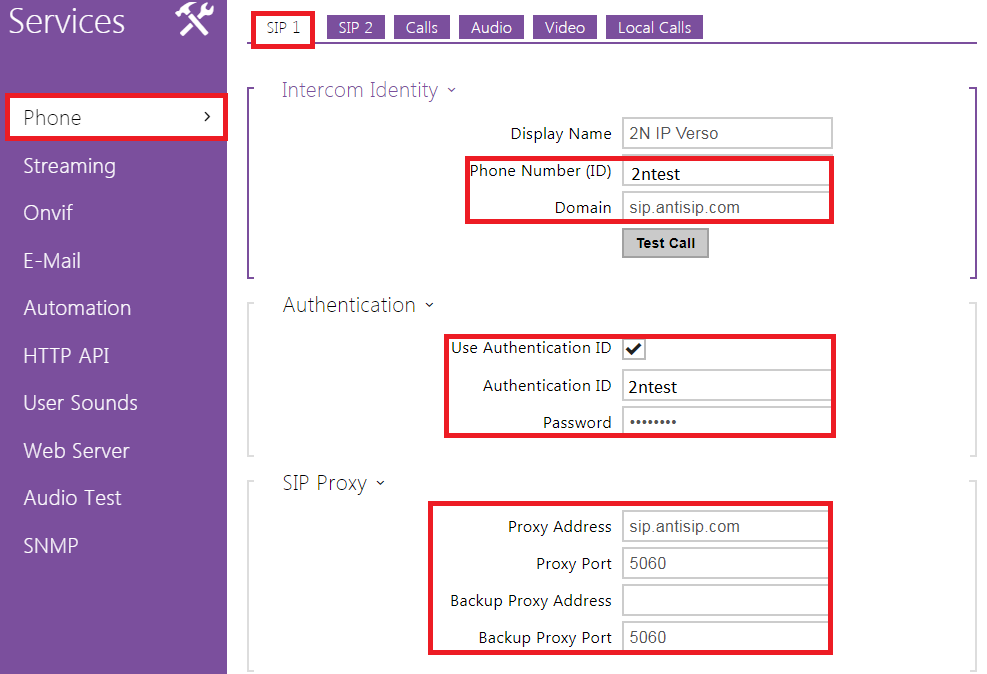 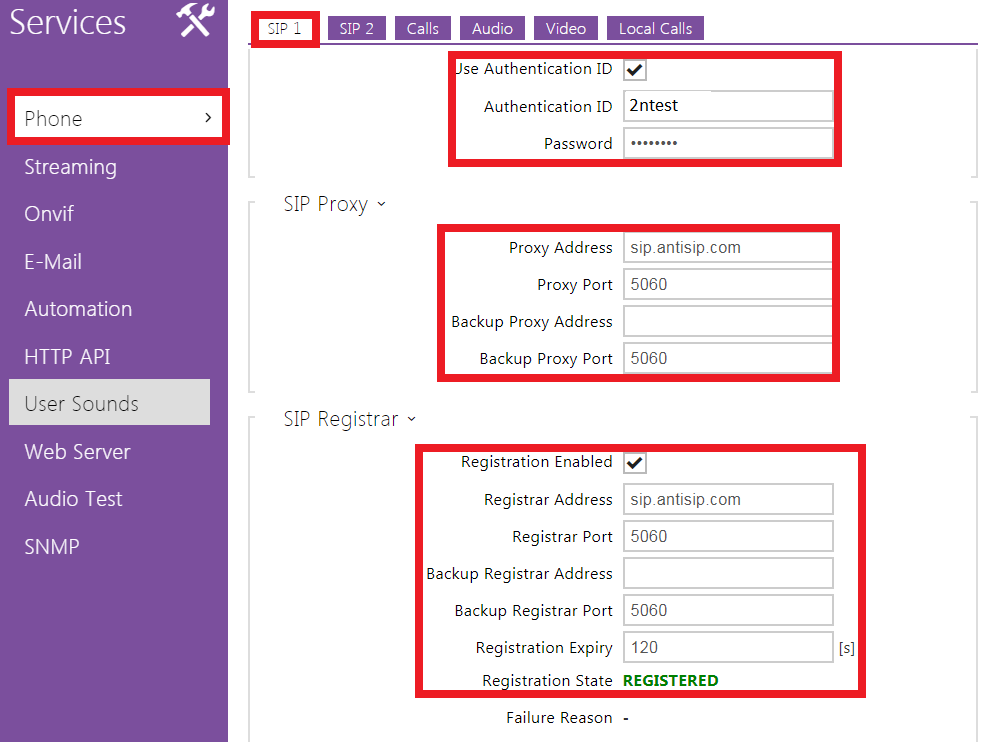 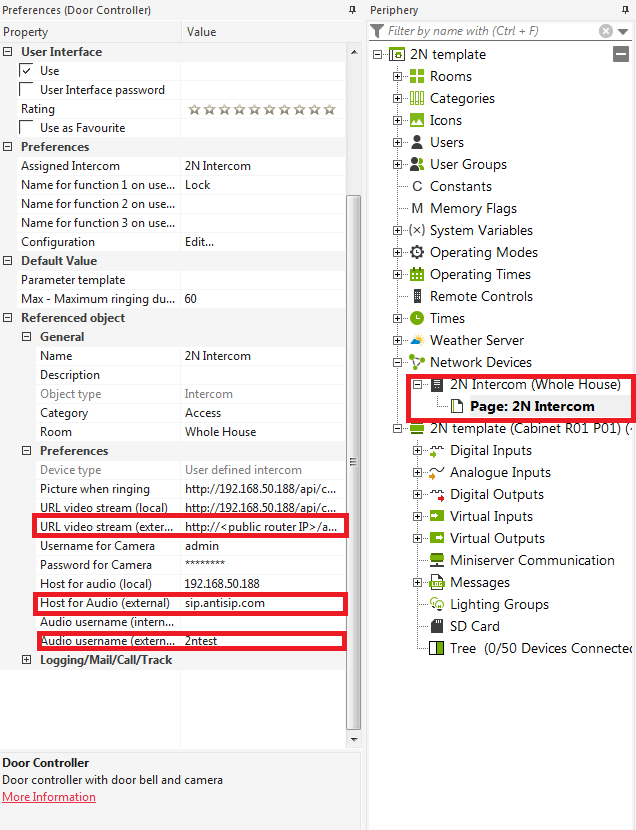 The next step is to create the port forwarding rules in your router to be able to connect from the Loxnone app to the mini server via the internet. Loxone provides a remote connection service. The first step is to register your Loxone mini server on their website. Once the device is registered, the Loxone mini server has a specific domain name to which it is connected. The domain name is dns.loxonecloud.com/<serial number of your server>. The Loxone server detects and stores info about your router public IP address and defined ports (specified in the Loxone mini server configuration -  described in the next paragraph) and once the Loxone app, which is placed somewhere in the internet, wants to connect to your mini server which is placed on the LAN, the request is sent to the same domain name and the Loxone DNS server forwards the request to your public IP address with specific port numbers. If the port forwarding rules are done correctly, your router forwards this request to the Loxone miniserver placed on your LAN.

Note that the default password to access the Loxone miniserver cant be used for remote connection. So a password change is required to be able to remotely connect to the Loxone mini server. Password can be changed on the user settings. 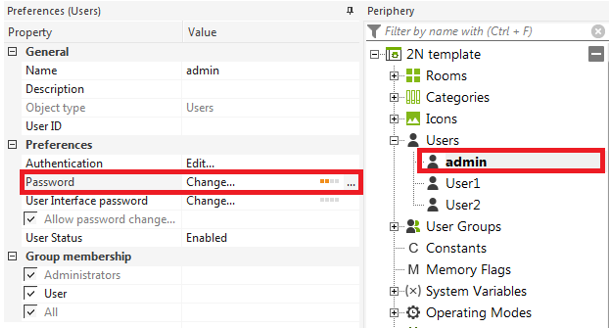 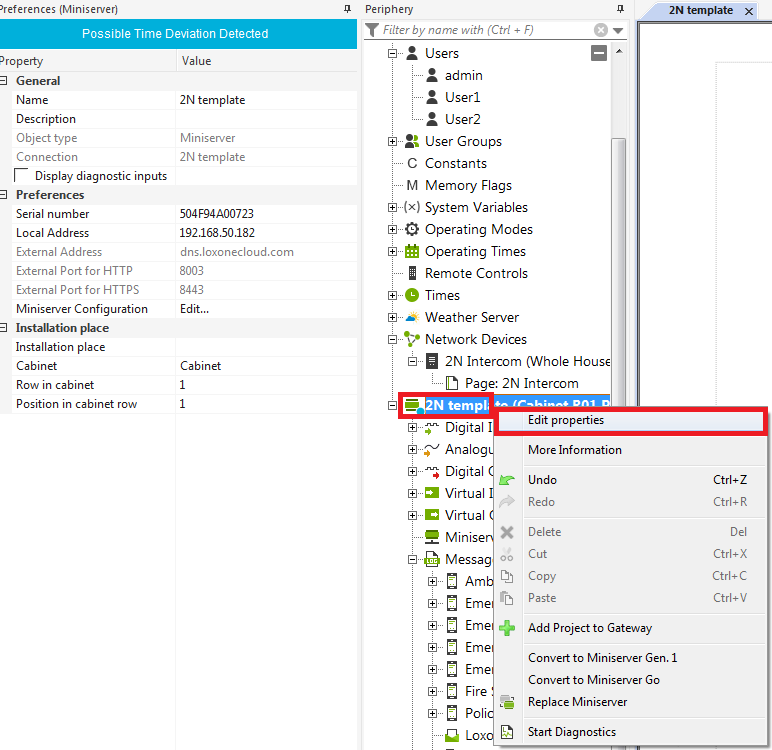 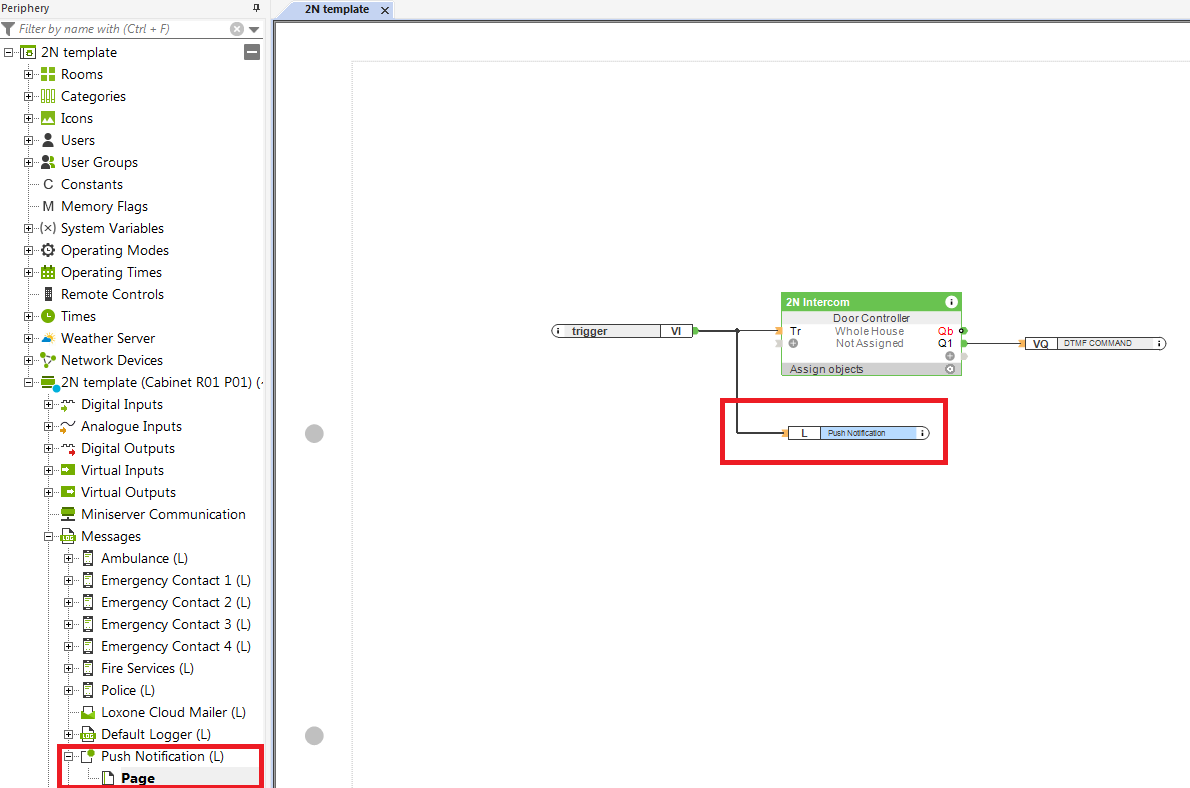