All 2N® 2N IP Intercoms are based on SIP protocol therefore they offer all advantages of VOIP services similarly as classical SIP phones. Configuration is made via web interface directly from a web browser. Comparison of offered models can be found in common configuration manual in chapter 3. Model Differences and Function Licensing (here).

All basic features are available without any additional licences, if some feature is licensed, then it won't be possible to edit it and it will be grey in the web interface. List of licences and table, which describes, which functions are enabled by which licence, can be found in common configuration manual in chapter 3. Model Differences and Function Licensing (here). How to get those licences is described in this FAQ. Which licences are currently active can be simply verified in section System->Licences in web interface. For each of licensed features it is possible to buy separate licence. For all features, which are described below, there is always stated which licences has to be purchased for particular feature. However, it is also possible to purchase licence Gold (Part No. 9137909), which makes most of the features available, see the table mentioned above.

As already mentioned, all SW configuration is made via web interface and it is described in common configuration manual here. In default intercoms are configured to DHCP mode and credentials are Adminadmin/2n. Address from DHCP can be discovered simply directly with button on intercom. How to do that is described in this FAQ. 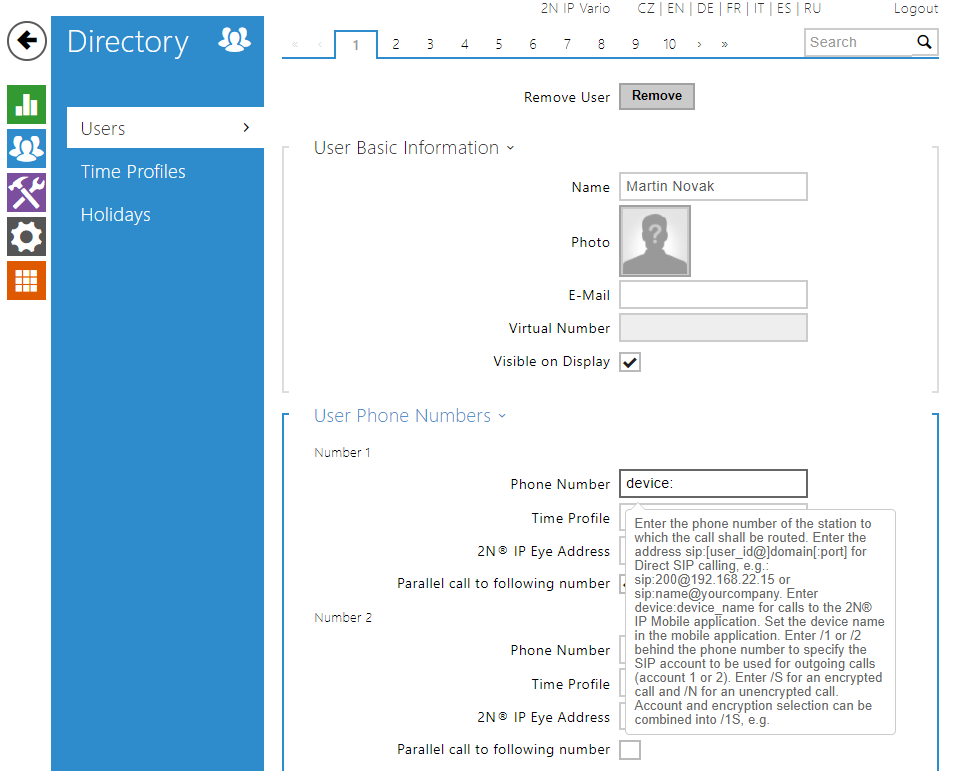 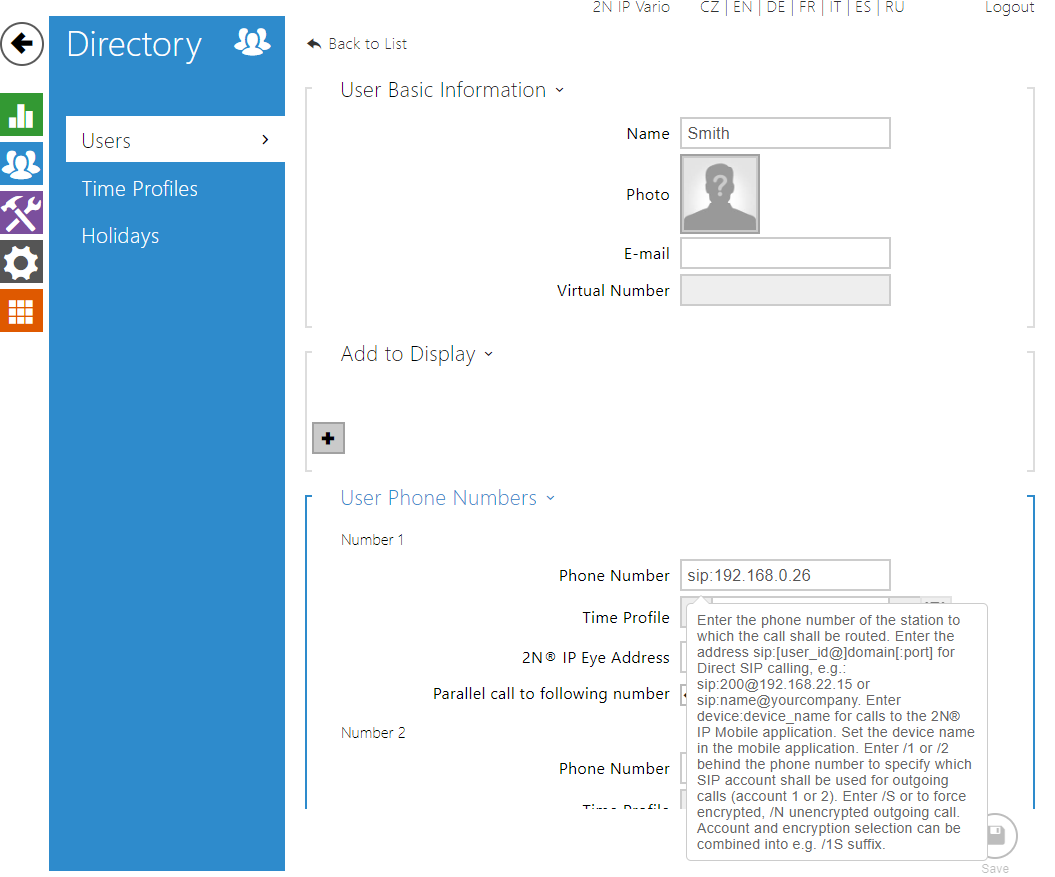 If native features of intercom are not enough to make your scenario functional, then it is possible to purchase Enhanced Integration (Part No. 9137907) to make Automation section available. This section allows you to program your own functions. Logic of this feature recognizes three basic variables:

If we apply this on our example with sending mail after button press, then we can put there Condition with time profile. So the mail will be send only when the button is pressed and the time profile is active (for example only during bussines days), see picture below. All available Events, Actions and Conditions are described in detail including all possible parameters in common Automation manual here. 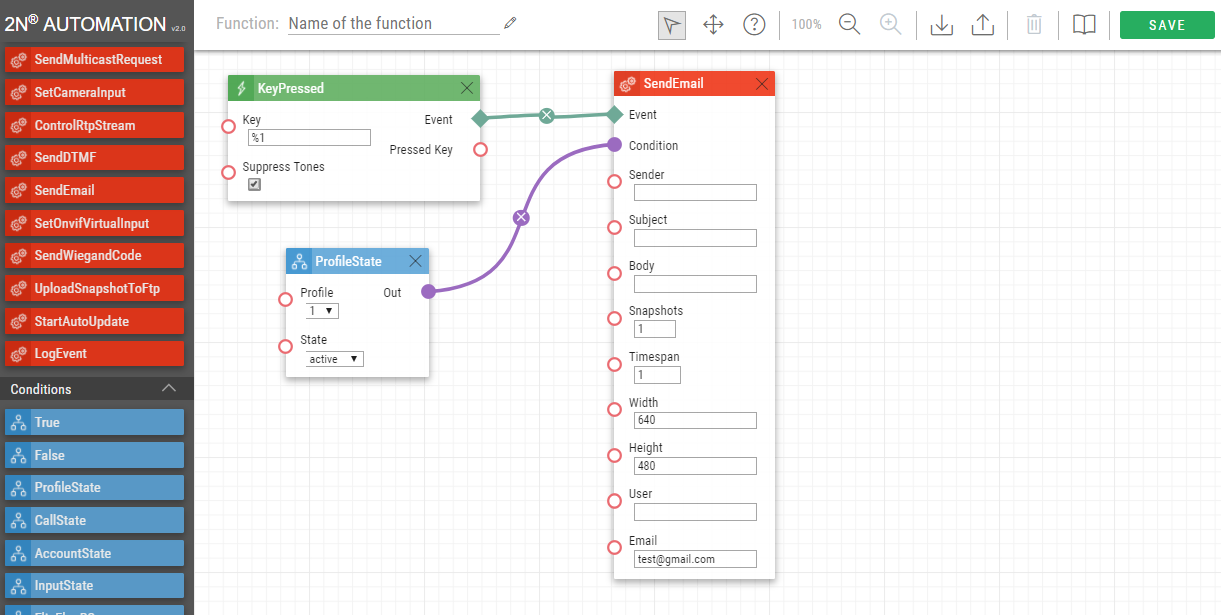 Image Modified
3. Streaming of audio and video from

2N IP Intercoms via RTSP and HTTP access to camera

2N® IP Intercoms allows watching of stream directly from camera including audio. To make this function available, it is necessary to buy Enhanced Video (Part No. 9137906) licence. This function is described more in detail in common configuration manual in chapter 5.4.02 Streaming (here). Example of how it is possible to display this stream is described in this FAQ, which describes how to set VLC player for receiving video. Where to configure streaming can be seen in picture below. You can use 4 different URL's for stream:

4. Configuration of Onvif on

2N® 2N IP Intercoms support international standard ONVIF, which makes them fully compatible with other ONVIF systems. To enable this function you have to purchase licence Enhanced Video (Part. No. 9137906). Configuration of ONVIF is described in detail in common configuration manual in chapter 5.4.03 ONVIF (here).

HTTP API also can be used for downloading logs from the intercom. 500 event can be stored in memory of log for example key presed, numeric code entered, RFID card detection, call status changed etc. RFID card detection can be used for integration with 3rd party attendance system. Logging including all messages in HTML is described in common Event Logging manual (here).

Thanks to inputs/outputs, which can be found on 2N® 2N IP Intercoms, it is possible to integrate the with 3rd party security systems. Typical example is Tamper switch. It is module, which detects opening of body of the intercom. This allows to create function in Automation (which is described above) which defines what will happen in case of unauthorized access to intercom. Example of this for 2N® IP Force is described in this FAQ. In this case intercoms is configured to play alarm sound from user sounds after unauthorized access to scare off the burglar.  However for integration with security system it is possible to connect input of security system to one of the intercom outputs and create function, which will ensure that after unauthorized access, logical 1 will appear on this output and alarm will be triggered. Example of such function is in picture below.

As already mentioned in this document, the installation manuals are different for each model of 2N® 2N IP Intercom. For download of these manuals you have to choose the right model on the guidepost page here and then download an installation manual. Whole installation is always described in this manuals starting with attaching to wall and ending with connection of additional modules. Very important chapter in all of these manuals is chapter Electric installation where all the inputs/outputs of the intercoms are described, also connection of the jumpers for different functions of inputs/outputs etc..

8. Solving of issues on

It is possible that despite all your effort you won't be able to make the intercom work. So if you will report issue, then please follow instructions described in this FAQ.