Normalization - How to use

If you are not familiar with Normalization in LCR, read the following explanation!!! 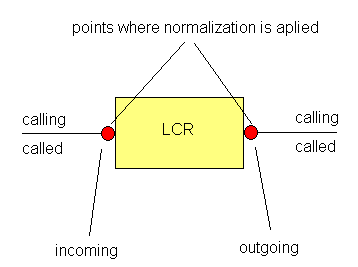 Digit(s) that you put in the Prefix field will be automatically stripped (removed). Number in the Remove count field means: how many digits AFTER THE PREFIX will be removed too. Digits in the Add number field will be added to the number, after removing prefix (and additional digits) from the LEFT i.e. at the head of the number.

You call from 111 to 0603555666 and you want to send it over the route ToPBX (contains only one line named PBX). You want to change the called number to 55603555666 in the case of prefix 06. This change would apply only if the call is routed to the line PBX. At the same time you need leading 0 to select ToPBX route in the LCR table. You have to set:

Line: PBX valid for calls routed to line PBX only (see the Type setting too)

Remove count: 0 no digits after the leading 06 will be removed